Months of sheltering-in-place and the loneliness it provokes contribute to the desire to add pets to our lives. Since the start of the pandemic, pet adoption has continued to rise in the United States; shelters, rescue facilities, private breeders and pet stores have all reported a surge in consumer demand for dogs and cats. As the reality of a protracted socially isolated life sets in, those of us who once felt we had no time to devote to caring for an animal now have time to spare.

Like nearly 55 million other Americans since March, my wife Michelle and I recently became unemployed, and our morale was low from the daily struggle of simultaneous job- and soul-searching. On the plus side, quarantining offered time to bond more closely; without the jobs that once kept us too busy and distant for quality time, there were new opportunities to reconnect.

Since our dating days, we’d discussed getting a dog. We both grew up with dogs, and had always wanted to adopt one as a couple. But as two working professionals who spent ten to twelve hours a day away from home, we weren’t the best candidates for dog ownership. However, as the idea of working remotely seemed more attainable than ever before, we decided that the time had come.

Full of hope, we set out to visit local shelters and rescue centers. To our surprise, most of the dogs in these places had either been adopted or were on hold, waiting for their new humans to be approved. We then went online, examining organizations’ websites and filling out application after application, only to be met by silence. Eventually, we became so desperate that we stopped by a local puppy store—an option we had originally refused to entertain. The slick-talking salesman escorted us from one plexiglass booth to another, presenting puppies from a variety of breeds, almost all of them less than three months old. When we finally found one we were interested in, he exclaimed, “And he’s all yours for only $4,900!”

“Are you kidding me?” Michelle remarked. “That’s like purchasing a car!”

GET THE BARK IN YOUR INBOX!

Sign up for our newsletter and stay in the know.

“Well, we also have excellent financing options,” he responded in a serious, yet sympathetic, tone.

The concept of purchasing a puppy as though it were a commodity was disturbing. I began to wonder where these puppies actually came from, and how to determine if a store or breeder could be trusted. And what happened to the unsold puppies, or the young dogs who had become too old for the showroom floor?

Roughly two million puppies are bred in the United States each year by both licensed and unlicensed puppy mills. How many will end up in shelters if pandemic trends and consumer demand decrease? As people return to work, will some of these dogs be abandoned or given up because they no longer fit in with the needs of their owners? By 2021, will we see an uptick in the 1.2 million shelter dogs euthanized each year? Questions like these reinforced our commitment to adopt from a shelter.

For more than a month, Michelle and I dedicated our spare time to staying in touch with our preferred local shelter, frequently checking in on any new arrivals. They called our references and conducted a virtual home visit ahead of time to ensure that we were good candidates. 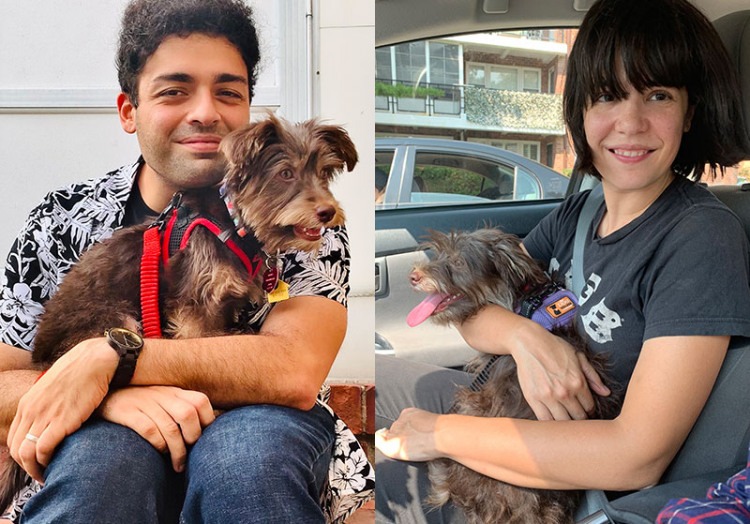 Raj and Maisie-Mae (left); Michelle with their new dog on the ride home from the shelter (right)

Then, it happened. We were notified that an “owner surrender” puppy had arrived at the shelter: a beautiful, five-month-old Yorkie mix, coincidentally born one day after Michelle lost her job in March. We were open to adopting an adult dog, but ideally, wanted a puppy we could train to suit our lifestyle, both as we worked remotely and when we returned to a full-time work schedule. As soon as the pup had been checked over by the shelter’s volunteer vet, we were welcomed to meet her.

Meeting a dog is like going on a first date. Would she like us? Would we vibe well together? To our amazement, she was everything we wanted in a dog: the sweetest disposition, housetrained and sprightly. We were in love. Two days after our initial meeting, we were able to take her home. Since then, she’s acclimated well to her new life.

Welcoming a new furry family member has influenced future life decisions as well. We’re beginning to envision a life centered around our home rather than a formal office location. Since the start of the pandemic, we’ve been able to place more emphasis on family life than career trajectory, and are actually beginning to prefer it.

Perhaps the dog adoption rate has been higher lately because more Americans are finally learning how to construct a healthy existence: caring for something beyond ourselves, companionship, affection, unconditional love, loyalty, mutual respect. Perhaps dogs teach us more about ourselves than our jobs do. By reveling in the basic necessities of daily life—a nap, a meal, a walk, a hug, an occasional bath, earned trust, a sense of duty and belonging—dogs are showing us what matters. And as we learn from dogs, maybe we’ll learn more about each other as well.

How Do I Train My Dog To Pass The Canine Good Citizen Test?

The New Year, well, more specifically, the days leading up to the New Year is my favorite time. I’m not