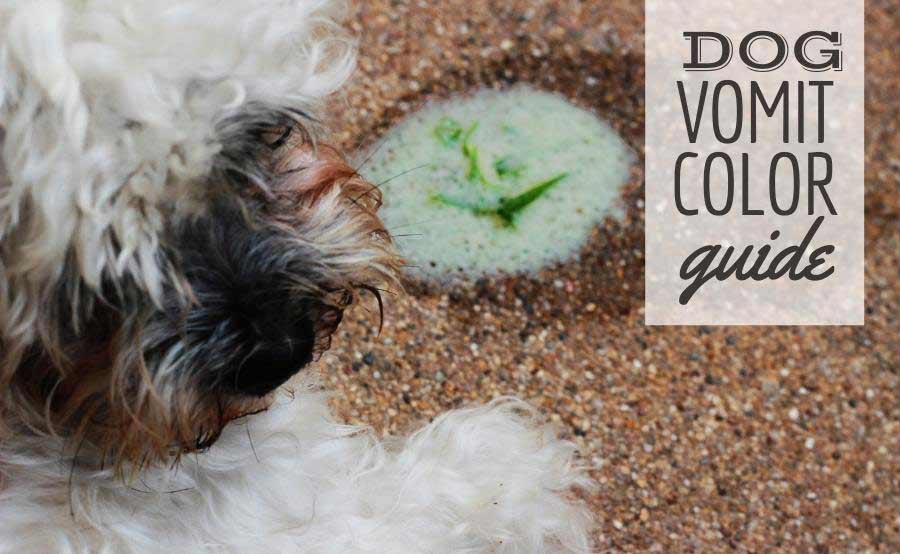 Our canine friends vomit from time to time – it’s practically a given when you’re a pet parent that at some point, you will be cleaning up after them. There are endless reasons why our dogs may get sick, and it’s not surprising when we see what habits they have at times. But is it possible to tell why they’re vomiting from the color of their vomit? A dog vomit color guide may be helpful for you to know when you need to worry about your furry best friend.

To understand dog vomit colors, you must first differentiate between a dog vomiting and regurgitating. 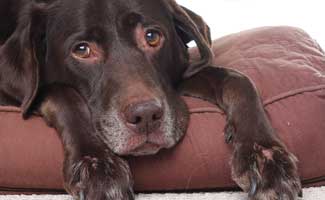 Vomiting is where a dog brings up partially digested food. Your dog may display signs of nausea beforehand, such as drooling or licking their lips, and the vomit will be accompanied by retching noises and contractions of their belly.

So what color should dog vomit be? Well, the color of dog vomit will be similar to what they’ve eaten but will appear digested (think along the lines of adding water to their meal and putting it in a food processor). There are lots of possible colors for ‘normal’ vomit, from a dog throwing up yellow foam to a green or white appearance to the vomit. Of course, how digested the food appears depends on how long ago they ate.

In contrast, regurgitation is when a dog throws up undigested food. It often occurs soon after eating and is unlikely to be accompanied by retching or signs of nausea.

Regurgitated food will look very similar to what your dog has just eaten or may take on the form of the stomach or esophagus and appear like a compacted cylinder of food. The color will depend on what your canine friend has just eaten.

What Does The Color Of Dog Vomit Mean?

Many illnesses can cause vomiting, and it can be challenging to pinpoint the exact cause. Vomit can take on many colors (not quite all the rainbow shades), and the precise color of dog vomit may help identify the cause. However, some colors on the dog vomit chart are more concerning than others. Here we list the common dog throw-up color meanings to help you decide how concerned you need to be.

Why is my dog throwing up yellow liquid? Rest assured that this is a ‘normal’ vomit color. Yellow vomit normally contains bile, a substance produced by the liver and stored in the gallbladder. A dog throwing up yellow bile typically occurs when their stomach is empty. It may appear foamy or liquid in consistency.

When dogs are feeling sick or have indigestion, their bodies may produce more bile than usual. Larger amounts of bile in vomit may have a yellow-green appearance. Yellow vomit is rarely a cause for concern unless it frequently occurs, although you should consider your dog’s overall health and other symptoms.

Green vomit could come from something your dog has eaten, such as grass. Dogs eat grass as a regular part of their diet to get fiber into their digestive system. Some dogs may eat grass excessively if they’re feeling nauseous. Green vomit could also indicate there is increased bile in your dog’s stomach.

When it comes to the dog vomit color scale, green isn’t usually a cause for concern. However, if your dog is vomiting excessively or for a prolonged period, then seek veterinary advice.

White or pale vomit may contain food that has been digested, especially if your dog hasn’t eaten for several hours. But if you have a dog throwing up white foam, this may indicate the dog’s stomach is empty, and they’re vomiting saliva and liquid only.

If your dog is trying to vomit but cannot, or they’re repeatedly bringing up small amounts of white foam, this could indicate bloat or more severe gut problems. This could be an emergency, and you should call the nearest open veterinary clinic immediately.

Black vomit can be due to your dog ingesting something of a similar color (such as farm animal poo or mud/dirt). However, black vomit can also indicate digested blood caused by eating toxins or bleeding within the gut. Black vomit shouldn’t be considered normal, and urgent veterinary advice should be sought.

Red vomit is of concern as it usually means the vomit contains blood. This could be due to bleeding within your dog’s intestines, toxin ingestion, or a problem with your dog’s blood clotting.

If your dog has been vomiting excessively for a short period, the vomit may be streaked with red blood. This could be because small blood vessels in the stomach or esophagus have burst due to the force of vomiting.

Red vomit should be seen as severe on the dog vomit color chart. Contact your veterinary surgeon for urgent advice.

Vomit often takes on the color of what your dog has eaten. Do you have a dog throwing up brown stuff? Many dog foods and kibble are brown, so this may be why your dog’s vomit is brown. Brown’s a common color for dog vomit.

As much as we love our furry friends, we must admit some have less than choosy dining habits. Brown vomit might mean your dog has scavenged something unsavory or eaten poo. Eating poo has a name – coprophagia. The clue might be in the smell of the vomit.

Dark brown vomit is more concerning. Digested blood may appear dark brown or have the appearance of coffee granules mixed in with the vomit. This could indicate bleeding within your dog’s intestines. If your dog is throwing up brown stuff repeatedly, you should contact your veterinarian.

If your dog’s vomit is an orange color, it could be for a few reasons. While bile is usually a yellow liquid, it can be tinted orange, so orange vomit may be a sign that your dog’s stomach was empty when they were vomiting.

Vomit can also take on the color of food or food coloring that was eaten. Look at your dog’s food and what they’ve recently eaten to determine if your dog’s vomit is an orange color because of food dye.

What Does The Consistency Of Dog Vomit Mean?

No one wants to hang around for long examining their dog’s vomit, but before cleaning up after your canine friend, it’s worth looking at what they’ve vomited. The consistency and content of the vomit might help understand why they’re vomiting and when to seek help.

Dog vomit may be filled with food they have recently eaten. This may be fully or partially digested, depending on how long ago they ate. They may be having trouble digesting their food, or something they ate may not suit them.

Dog vomit with nothing in it may mean no food to throw up, and their stomach is empty. This can happen if they haven’t eaten recently or persistently vomited and have already emptied their stomach. It can be a sign of indigestion, a build-up of stomach acid, or acid reflux. If your dog is throwing up yellow liquid, it may be bile.

When dogs feel sick or nauseous, their bodies produce more saliva. When saliva mixes with the stomach contents, it forms a foam-like consistency (often clear or white).

Throwing up white foam normally means your dog’s stomach is empty. The causes of vomiting are varied but may indicate indigestion or an upset stomach from something they have ingested.

Foreign objects being thrown up such as toys, rocks, or material is a way of your dog’s body getting rid of items that aren’t meant for digestion. Foreign objects are nearly always of concern as it may mean your dog has eaten or chewed things that are dangerous to them.

There is a risk that they can’t vomit all of the foreign material they’ve ingested and that the remainder gets stuck, causing an obstruction. This could result in a severe medical emergency.

When Should I Worry About My Dog Vomiting?

If the vomiting is a one-off, it’s usually nothing to worry about as a general rule. If it happens repeatedly, or if you’re concerned, always contact your veterinarian as soon as possible. Signs your dog may need urgent veterinary care for vomiting include:

Did You Know Pet Insurance Can Cover Illness?

Seeing your dog unwell can be very upsetting. If it only happens once in a while, it’s unlikely to be anything to worry about.

Some dogs have a reputation for eating just about anything, so vomiting can be a useful, protective mechanism. However, the next time your pooch is feeling sick, pause to consider what they’ve vomited – it may just help identify what is wrong and indicate when you might need to seek medical attention for your pet sooner.

What Is It and Does Your Dog Even Need One?

You’ve likely run across the self-warming dog bed while shopping for other items for your pup, particularly among winter dog