Cancer in dogs can be caused by both nature and nurture. But even if your pet dog’s breed is already at an increased risk of cancer, paying attention and removing certain products from their life can significantly decrease that risk.

Studies show that while some breeds are genetically predisposed to cancer (1, 2), different cancers in dogs are often caused by external factors and cancer-causing dog products (3, 4, 5, 6, 7). Whether it’s food ingredients or household supplies, pet owners are strongly advised to avoid some items.

Generally, cancer is a disease of senior dogs (8). A dog’s skin and soft tissues are the most common places for cancer to show up in dogs, with Canine Cutaneous Histiocytoma, a type of skin tumor from Langerhan cells, being the most common in dogs all across the world, and caused by products or environmental contamination (9, 10, 11, 12). 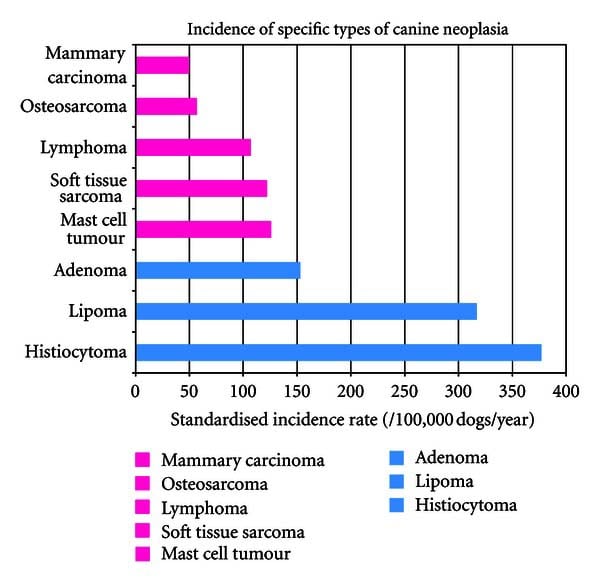 There’s a huge number of different cancers that external factors can cause. As an example, let’s take a look at a mammary tumor in dogs. While hormones may cause it, studies have detected contaminants in the most aggressive tumors (13).

In one of the many cases, pyrethroids were a very common household insecticide. Doctors detected 33.3% in canine tumors – which became the trigger for the proliferation of cancer cells in dogs (14). That is to say, even with breeds predisposed to cancer, they will not necessarily develop it unless they’re exposed to some of these products that stimulate cancer cells (15).

This is just one of the multiple offending items often found in households with pets. Below are the rest of the common cancer-causing dog products that it’s recommended to avoid.

Since the 2013 EU aflatoxin contamination, where several European countries reported nationwide contamination, aflatoxin has been on World Health Organization‘s “to watch” list and even banned in many places (16, 17).

Aflatoxins are well-known carcinogens poisonous to dogs and humans. They’re produced by fungi that grow in soil and are used commercially produced corn, peanuts, and cottonseeds (18). While it has been banned in some U.S. states, some still allow its use, and you might not always be able to tell from the label if your dog’s food contains it.

This toxin was shown to be more dangerous to pets than humans (19). The risk of liver damage and liver cancer in dogs increases by 30 times when pets are exposed to aflatoxins (20, 21).

Before you purchase a certain brand of dog food or treats, check online to see if it contains this ingredient. You can also call the pet food manufacturer and ask whether this ingredient is part of their formula.

Commercial dog foods and treats stored on the shelf must always use some preservatives to keep them from spoiling and staying somewhat fresh. This part is unavoidable unless you choose fresh dog food only.

However, while certain dog food preservatives may be natural and very effective and preserving foods, other types are known to cause cancer. Ethoxyquin is one of them, and it’s commonly found in dog foods with the fish meal (22).

People exposed to high levels of ethoxyquin – which was originally developed as a herbicide – have experienced blindness, infertility, and cancers such as leukemia. In dogs, ethoxyquin can cause immune deficiency, damage to the kidney and liver, and cancers of the dog’s spleen, liver, skin, and stomach (23, 24, 25).

Ethoxyquin is just one of the many preservatives that may be dangerous to dogs. There are others, including BHA and BHT, that were also shown to be cancer-causing. However, their levels are below what EPA considers “unsafe” (26), so they’re still allowed to be used in foods. It’s up to the pet owner to be diligent if they wish to avoid them.

Glyphosate is a commonly used herbicide found in commercial products as well as pesticides for home use. These products are among the most offending cancer-causing dog products on this list, with enough scientific evidence proving their harm (27, 28).

Manufacturers originally developed this herbicide to replace an older version of pesticides, but studies from the last decade point out its toxicity and dangers (29). Glyphosate can cause DNA damage and mutations in dogs, leading to many different types of deadly canine cancers and other incurable diseases (30, 31).

You may not think of laundry supplies as cancer-causing dog products, but some of them will be. Certain laundry products, such as detergent, fabric softener, bleach, and dryer sheets, can be hazardous for dogs (32, 33). Some items may include formaldehyde which is a known carcinogen (34).

While most laundry supplies will not harm you or your pet in small doses, any cancerous cleaning supplies or different laundry products may have a harmful effect if a dog gets access and ingests them in higher dosage or on more than one occasion.

Choose more organic cleaning products. Always keep laundry supplies out of your pet’s reach. Carefully rinse your dog’s supplies before giving them back. You can also make more natural homemade cleaning supplies and even a homemade laundry detergent the DIY style, safe for dogs ingredients. 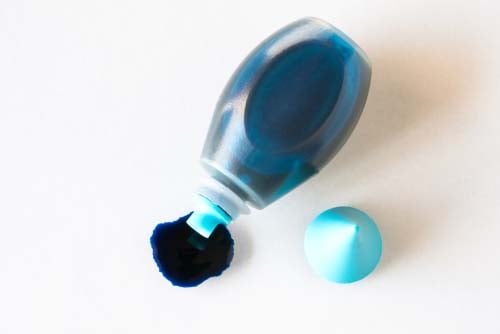 Certain blue food coloring, specifically Blue 1 (Brilliant Blue FCF) and Blue 2 (indigotin) have been shown in studies to be cancerous to animals (35). For example, research of both Blue 1 and Blue 2 food coloring saw it directly linked to the cause of brain tumors in animals (36, 37).

Even though most dog food isn’t blue and uses very little to no food coloring, these food dye ingredients are still found in some dog foods or treats.

Even though using dog flea and tick treatments occasionally is fine, many dog owners apply them year-round, “just to be safe.” Ironically, this could be worse for the dog. Some pesticides found in flea/tick products, such as fipronil and permethrin, can lead to some health problems in dogs, albeit rarely.

The flea and tick solution ingredients were shown to cause thyroid and other cancers in dogs and cats, but in rare instances (38). Some can also cause bladder cancer in dogs (39). Moreover, pet owners who have children should know that some flea/tick products increase the risk of brain cancer in kids (40). 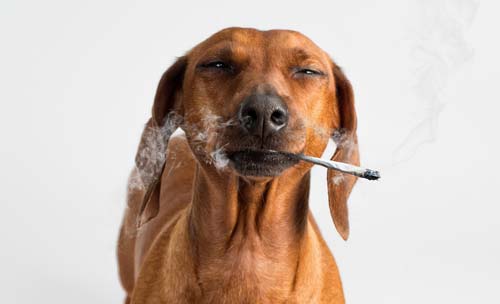 Smoking and the use of tobacco products can cause cancer in humans, and it can have the same effect on animals (41). Smoking anywhere near your dog significantly increases their risk of lung cancer and oral cancer (42, 43, 44).

This risk can further increase if your pet ingests cigarette butts or ashes regularly. If you do smoke, minimize the chance and avoid smoking around your pet. Learn more about how tobacco smoke affects pets and what you can do about it.

If you stick with smoking, it’s recommended to do this outdoors in a well-ventilated area and properly dispose of ashes and butts far away from your dogs. Wash your clothing regularly and keep it in a closed hamper away from pets as well.

Vaccines are important for your dog in many cases, against many dangerous diseases, and they are generally safe (45, 46). We don’t recommend avoiding vaccinating your dog, particularly when it comes to core vaccines. There are even vaccines in development to serve as anti-cancer in dogs, and they have been proven completely safe (47, 48, 49).

However, over-vaccination can, in fact, become a problem. This is particularly important for puppies, which should be vaccinated for certain diseases only at specific ages. Over-vaccination can also lower the dog’s immunity which is dangerous for breeds at higher risk of cancer since they will be less effective at fighting it (50, 51, 52).

Cancer may be inevitable for some dogs genetically predisposed to this disease. However, certain cancer-causing dog products, harmful ingredients, or household supplies will also increase cancer risk for any category of dogs. They are particularly dangerous to dogs with genetic predisposition and weakened immune systems.

READ NEXT: 30 Myths That Many Dog Owners Still Believe 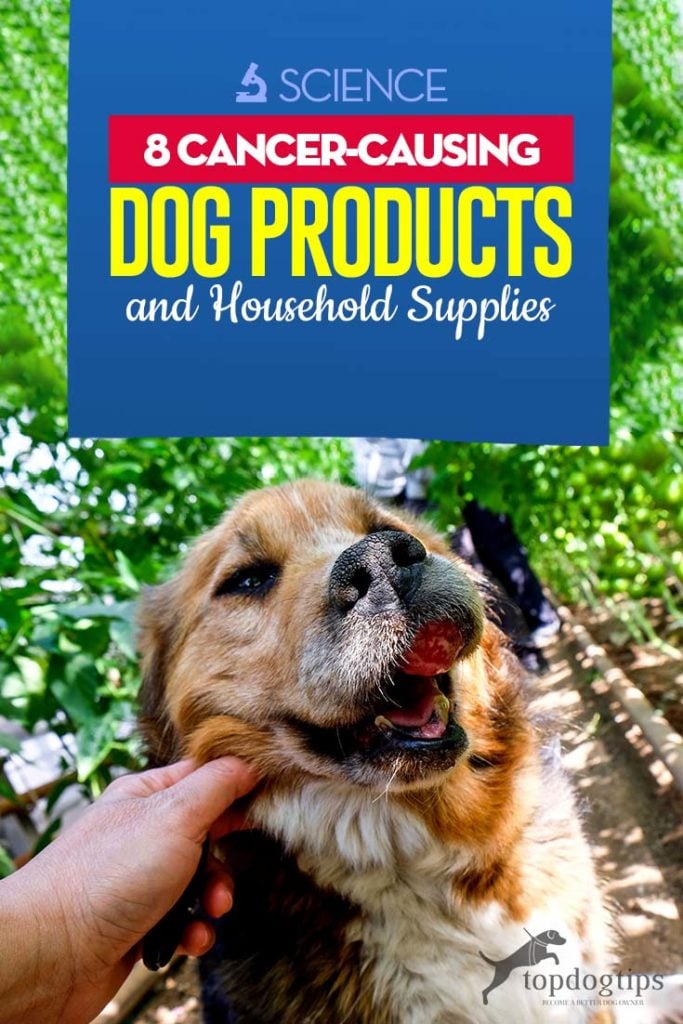 How Much Does It Cost To Spay Or Neuter A Dog?

A Case of Canine Cataracts – Dogster

Show him, Sadie. See? Look, look! See how she can’t see her cookie?” I was seated across from an 11-year-old

Tips to Train Your Dog When You Live in the City

Dog Hiccups: Can Dogs Get Hiccups?